[ Huaqiang Security Network News ] Stitching technology has become a trend of society more and more, let's talk about PDP, LCD, DLP stitching theory.
From the current application trend in the Chinese market, due to the broad vision of LCD, high brightness and high contrast image, long life and low maintenance rate, it is increasingly important in important parts such as national key transportation, transportation hubs and large venues. It has become a trend to use a large LCD screen to establish a monitoring and command system. After the Samsung UT LCD splicing screen was launched in China, the multiplication of LCD market share in the video splicing field in 2009 also illustrates this point. Especially in the field of security monitoring, LCD large screen system splicing wall is gradually replacing the traditional CRT, DLP splicing wall, becoming the preferred successor of professional security monitoring splicing large screen.
Senior engineers and technicians believe that LCD products present advantages in use: 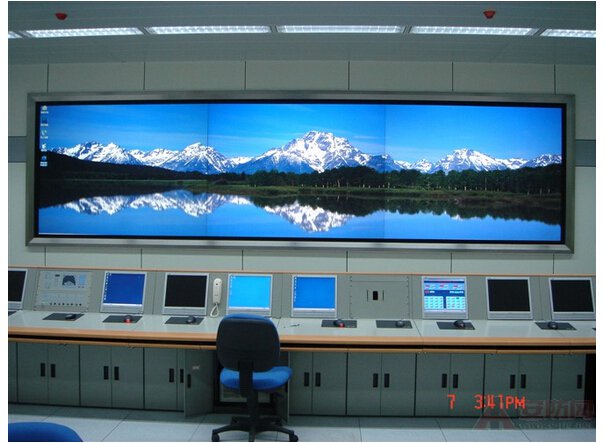 First, the combination is free, using a more flexible LCD splicing wall, not only the number of splicing, the number of rows, the number of columns can be arbitrarily selected, but also can be mixed splicing, shaped placement, which satisfies not only the general monitoring command site, but also special The need for special shaped stitching in the place.
In practical applications, in addition to the large screen display of the whole screen, the splicing curtain wall also needs to realize multi-channel small screen display. For example, the splicing curtain wall of a traffic monitoring center requires more time to view the screens of all monitoring points at the same time. When an abnormal situation occurs at a certain monitoring point, it can be quickly enlarged to the full screen for all the people in the monitoring center to watch at the same time. This requires that in actual use, the splicing curtain wall should achieve a good display effect on both large and small screens. Combined with Samsung's 17-inch to 40-inch LCD monitors, Samsung's products of the same quality and standard are assembled to best meet the needs of users. Compared with the DLP rear projection and PDP plasma splicing curtain wall, it has the advantages of high resolution, size and size mixing and splicing, and relatively simple control unit. It is beneficial for users to arrange the splicing scheme according to actual needs and achieve matching. , each has its own effect.
Second, the stable life is too long, the maintenance cost is very low. Compared with DLP and PDP, the service life of liquid crystal is very long, almost equivalent to CRT, and the power is low, the heat is not large, and the failure rate is very low. PDP plasma is prone to plasma imprinting. When displaying high-intensity still images, screen burns may occur in about 5,000 hours. DLP's bulb life is only 3,000 to 5,000 hours, even for some long-life bulbs. Below the display life of the LCD screen. Therefore, in the selection of the large-screen splicing curtain wall of the security monitoring and command center that needs to be used continuously for 24 hours, the LCD splicing curtain wall can be selected to better improve the usage rate, reduce the use cost and maintenance cost.
According to the relevant technical personnel, LCD is currently recognized as the most suitable product for professional surveillance terminals in the security field. As the technology leader of liquid crystal display products, Samsung has improved the seam specification of LCD splicing unit by more than 70% since the introduction of the DID splicing display panel to achieve the minimum 6.7 mm bilateral splicing seam. The seam technology of LCD splicing products has been significantly improved, which has significantly narrowed the gap between products such as DLP and other products. It has also expanded the use of liquid crystal products. LCD splicing products have entered the mainstream application market in full, and the market share has already appeared in 2009. Fan's promotion. At present, the problem of splicing gap caused by the bottleneck of liquid crystal splicing LCD panel cutting technology is being significantly solved due to the advancement of technology. The mass production of Samsung liquid crystal splicing products with only 3 mm bilateral thickness display units is also on the agenda, which is expected to be It will be officially launched in the second half of 2010. I believe that the era of full application of Samsung LCD splicing wall is coming soon!
Third, the color is high-definition and the energy consumption is relatively low. In video surveillance, the camera provides the front-end acquisition picture, and the monitoring terminal needs to complete the output display of the back-end video image. When the camera is driven by the wave of high definition and the quality of the collection is constantly improving, the development of the monitor will also usher in a high-definition revolution, so that the high-definition image is truly restored.
In terms of monitors and large-screen splicing walls, DLP and LCD have always been difficult to distinguish, each with its own unique advantages, and this pattern may change rapidly in the future.
It is understood that DLP has a small gap in the splicing, the display contrast is very high, and the unit size is large, but the volume and occupied area of â€‹â€‹the DLP splicing wall are relatively large, the power consumption is high, and the brightness is reduced due to long-time work. In this regard, although the market has used the use of dust-free cabinets to reduce dust falling in, to prevent the impact of brightness, and the use of dual-lamp technology, built-in two bulbs, while working at the same time, greatly improving the brightness of the screen, However, it has further improved the energy consumption of DLP and does not meet the demands of modern society for low energy consumption.
The splicing technology of the LCD liquid crystal splicing screen is to use each unit as an independent splicing processing system, and input a complete signal and control signal, which are processed by each unit alone, so as to ensure that the signal amount to be processed by each unit body is small and sufficient. Ensure the clarity of the image and the smoothness of the video. The 6.7mm ultra-narrow edge gap is an almost seamless category accepted by the human eye. What is more exciting is that the new 3mm product will soon be put into mass production, making it more conducive to the splicing of large screens and further enhancing the overall look of the picture.