Abstract data sheet: Fine adjustment or manufacturing of special-shaped parts If it is very inconvenient to re-program a CNC machine tool, some can only be polished by hand. This requires a very experienced "big country craftsman". These senior technicians work for China. ... 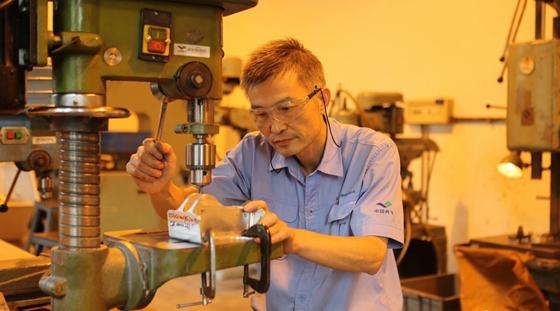 Data map: Fine adjustment or manufacturing of special-shaped parts If re-programming with CNC machine tools is very inconvenient, some can only be polished by hand. This requires a very experienced "big country craftsman", these advanced technicians for industrial production in China. The great contribution cannot be measured by money.

On May 2nd, the CCTV series "Daguo Artisans" launched the fourth episode to introduce Hu Shuangqian, the chief fitter of China Commercial Aircraft Manufacturing Co., and praised him as an aviation "artist". He has processed hundreds of thousands of aircraft parts in 35 years, and it is commendable that there has not been a defective product.

The C919's first aircraft is preparing for the early first flight. On this large aircraft with millions of parts, 80% is the first design and production in China, and the complexity can be imagined.

The fitter Hu Shuangqian is polishing a precision part of the big plane. In this modern CNC lathe factory, all the work is done by hand. Hu double money, like a somewhat outdated antique, his drawer is full. Old-fashioned tools of the same age. In this 3,000-square-meter factory, Hu Shuangqian and his team of fitters are not eye-catching, but grinding, drilling, polishing, fine adjustment of important parts, the fine work required for these large aircraft can only be done by hand. . Hu Shuangqian said: "There is a small angle, right-angled part. It can't reach the knife, but it has to be repaired by hand. It means that there is a part. If you are very anxious, if you do it with a CNC machine. To program, but rely on our machining, it is possible to make this part in the shortest possible time."

What the aviation industry wants is fine work. The machining accuracy of parts of large aircraft is required to reach one tenth of a millimeter. This is described by Hu Shuangqian: "It is equivalent to one-third of the hair of a person, the tolerance of this concept." Hu Shuangqian has been working in this workshop for 35 years, and the parts that have been completed by him have not produced a defective product. In China's civil aviation production line, few people have more say than Laohu.

In 1980, Hu Shuangqian, who liked airplanes since he was a child, just entered the factory and witnessed the Chineseâ€™s first attempt in the field of civil aviation. The first flight of the Yun-10, he said: "Itâ€™s time to go up, the flight test scenario. It has been in my mind now, and I have always remembered it."

However, the joy has not yet dissipated, and Yun-10 was finally dismissed for various reasons. The Shanghai Aircraft Factory, which originally gathered the Chinese aviation manufacturing elite, suddenly cooled down. At that time, the factory gate was filled with special vehicles for various industrial and technical enterprises in Shanghai to recruit employees. The boss of the private enterprise even gave him a high salary of three times the salary, but Hu Shuangqian refused.

In 2006, Chinaâ€™s new generation of large aircraft C919 was finally established, and the Chineseâ€™s big airplane dream was once again ignited. The manufacture of the big plane made Hu Shuangqian busy again, not only to do all kinds of different shapes of parts, but also to temporarily rescue. Once, production requires a special part, and it takes several days to deploy from the original factory. In order not to delay the construction period, only the titanium alloy blank can be used for temporary processing on the spot. This task was handed over to Hu Shuangqian.

Hu Shuangqian recalled: "One part needs more than one million. The key is that it is forged and forged, so the cost is quite high. Because there are 36 holes, the size is different, and the hole precision is 0.24 mm."

0.24 mm, equivalent to the diameter of human hair, this part of the original CNC lathe to complete the task, but at that time can only rely on Laohu's hands, and a traditional milling and drilling machine, even the drawings are not . After playing these 36 holes, Hu Shuangqian spent more than an hour. When the metal carving is over, the parts are inspected and sent for installation.

Hu Shuangqianâ€™s colleague, Cao Junjie, said: â€œThere are difficult and urgent items, and I always think of Laohu. Itâ€™s normal to call him in the middle of the night. But on the contrary, he is definitely less in the family.â€

Now, Hu Shuangqian has to spend six days a week in the workshop, this only family portrait is still in 2006. More than a year ago, Laohuâ€™s family moved out of a 30-square-meter old house that had lived for more than a decade, and borrowed a 70-square-meter new home in Baoshan District, Shanghai. As a first-line worker, Lao Hu did not earn more money for his family, but brought back a certificate of merit.

Li Julan also showed the reporter the National May 1st Labor Medal, saying that she had put this protection very well. I would appreciate it if I didnâ€™t put it outside.

This year, the domestic C919 big plane will usher in the ninth year after the project is established, Hu Shuangqian will also usher in the 55th birthday of life. Itâ€™s been 5 years since retirement, but Lao Hu feels that this time is too short.