The aviation piston engine is a machine that uses gasoline and air to mix and burn in a closed container (cylinder) to expand work. Piston engines must drive the propeller to generate a push (pull) force from the propeller. Therefore, as the power unit of the aircraft, the engine and the propeller are inseparable.

(1) The main components of the piston engine 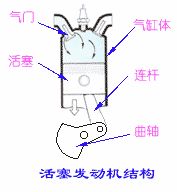 The cylinder is where the mixture (gasoline and air) burns. The cylinder contains the piston for reciprocating motion. The cylinder head is equipped with an electric spark plug (commonly known as a nozzle) for igniting the mixture, as well as inlet and exhaust valves. The cylinder temperature is high when the engine is working, so there are many fins on the outer wall of the cylinder to expand the heat dissipation area. The arrangement of the cylinders on the engine casing (the casing) is mostly star-shaped or V-shaped. Common star engines range from 5, 7, 9, 14, 18 or 24 cylinders. In the case where the single cylinder volume is the same, the more the number of cylinders, the greater the engine power. The piston withstands the gas pressure to reciprocate within the cylinder and converts this motion into a rotational motion of the crankshaft through the connecting rod. A connecting rod is used to connect the piston to the crankshaft. The crankshaft is the component of the engine's output power. When the crankshaft rotates, the propeller rotates by the reducer to generate a pulling force. In addition, the crankshaft also drives some accessories (such as various oil pumps, generators, etc.). The valve mechanism is used to control the intake and exhaust valves to open and close at regular intervals. 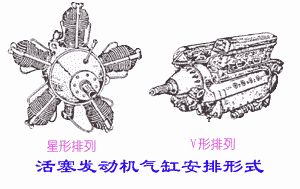 When the engine starts to work, first enter the "intake stroke", the intake valve on the cylinder head opens, the exhaust valve closes, the piston slides from the top dead center down to the bottom dead center, the volume inside the cylinder gradually increases, the air pressure Lower - lower than the outside pressure. The fresh mixture of gasoline and air is then drawn into the cylinder through the open intake valve. The ratio of gasoline to air in a mixed gas is generally 1 to 15 or 15 kilograms of gasoline for one kilogram of gasoline.

After the intake stroke is completed, the second stroke, the "compression stroke", is started. At this time, the crankshaft continues to rotate by inertia, pushing the piston upward from the bottom dead center. At this time, the intake valve is also closed as tightly as the exhaust valve. The internal volume of the cylinder is gradually reduced, and the mixed gas is strongly compressed by the piston. When the piston moves to the top dead center, the mixed gas is compressed in a small space between the top dead center and the cylinder head. This small space is called the "combustion chamber." At this time, the pressure of the mixed gas is added to ten atmospheres. The temperature also increases to around 4OO degrees Celsius. Compression is to make better use of the heat generated by the combustion of gasoline, so that the pressure of the mixed gas limited in the small space of the combustion chamber is greatly increased, so as to increase its function after combustion.

The compression stroke is followed by the "working stroke" and also the third stroke. At the end of the compression stroke, when the piston approaches the top dead center, the spark plug on the cylinder head generates an electric spark by high-voltage electricity, igniting the mixed gas, and the burning time is short, about 0.015 seconds; but the speed is fast, about every second. 30 meters. The gas swells violently, and the pressure rises sharply, reaching 60 to 75 atmospheres, and the temperature of the combustion gas is 2,000 to 250 degrees Celsius. When burning, the local temperature may reach three or four thousand degrees, and the impact force of the gas added to the piston can reach 15 tons. Under the strong pressure of the gas, the piston moves rapidly to the bottom dead center, pushing the connecting rod to the lower door, and the connecting rod drives the crankshaft to turn.

This stroke is the only stroke that allows the engine to work to gain power. The remaining three strokes are prepared for this stroke.

From the intake stroke to the fresh mixed gas, to the exhaust stroke to exhaust the exhaust gas, the thermal energy of the gasoline is converted into the mechanical energy that pushes the piston to move, and the propeller rotates to work. This general process is called a "cycle." This is a recurring movement. Because it contains the conversion of thermal energy to mechanical energy, it is also called "thermal cycle."

In order to complete the four-stroke work of the piston aero engine, in addition to the above-mentioned components such as the cylinder, the piston, the link, the crankshaft, etc., some other necessary devices and components are required.

In addition to the main components, the engine must have a number of auxiliary systems to work with. There are mainly air intake systems (in order to improve the high-altitude performance, a supercharger is often installed in the intake system, its function is to increase the intake pressure), the fuel system, the ignition system (mainly including high-voltage magneto, power lines, spark plugs) ), starting system (generally electric starter), cooling system and lubrication system.